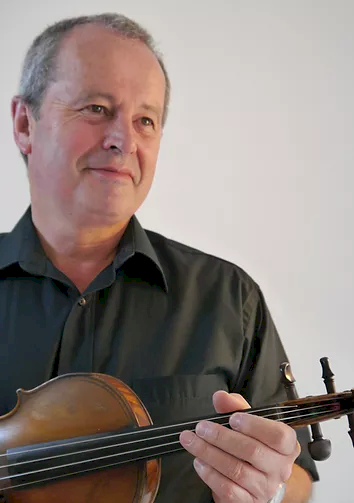 ‘Composer in Residence’ for Corinium Radio

Corinium Radio is hitting the right note thanks to a prestigious new appointment.

The Cirencester-based community radio station has started the new year off in grand style by awarding the title of ‘Composer in Residence’ to a local musician.

The role has gone to violinist, coach and composer Andrew Hodges, who has been described as someone whose expertise spans a broad spectrum of different subject areas.

He says his two principal passions are classical music and extreme music improvisation.

Andrew’s original training was as a violinist at the Royal Academy of Music. His working life has been wide and varied, including having been Head of Music in a west London school.

Said Corinium Radio spokesman Tony Coleman, “We are really lucky that our paths have crossed. We’re looking forward to a whole host of projects that will benefit from Andrew’s skills. We are really excited and eagerly anticipating what the future will bring.”

Tony added that a piece of Andrew’s music had already been included in a programme about World War One, which was made at the end of 2018 and called Cirencester Remembers 1918.

The historic programme – it was the longest ever put together by the station at two and a half hours in length – told the story of how the Cirencester community came together to mark the centenary of the ending of the Great War on November 11th last year.

It included stories from the war, music from the period and interviews with those who helped create the giant human poppy as a mark of respect to those who lost their lives in the conflict.

You can find it on our listen again facility under ‘specials’ on the list to the right of the page. Visit www.coriniumradio.co.uk. If you would like to join us why not call Carole Boydell on 07776 144033 to find out what we’re all about.

0 comments on “Composer in Residence For Corinum Radio”