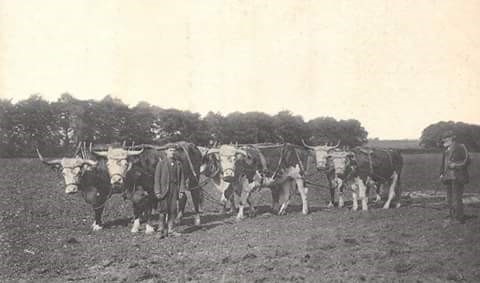 Country Matters
By The Hodge
‘The cow is of the bovine ilk;
One end is moo, the other, milk.’
Ogden Nash ‘The Cow’ 1931
Bovines – or cows to thee and me – are familiar creatures compared with some farm livestock. After all, once spring arrives, we see them in the fields as we drive around in pursuit of whatever it is that drives us. There they are, in all shades of brown, or black or black and white or grey or white or whatever, grazing the fields, chewing the cud, lying under trees to tell us it’ll soon rain or standing threateningly at the gate while we decide if that really was the footpath we wanted to take the dogs along.

Of course, apart from colour – and sex if I’m allowed to mention such a thing in Scene – not all ‘cows’ are the same. For a start, we lazily call them all ‘cows’, the female of the species in just the same way we refer to cats, also female felines, or dogs, the males of that species. Horses and pigs are easier as neither refers strictly to one of the sexes. ‘Cattle’ would be a better term as long as there is more than one in sight although, confusingly, ‘cattle’ used to be a general term for farm livestock; thus a ‘cattle market’ dealt in all farm species.

So, have a look at the nether regions of one of your cattle to see if what is dangling there makes them a cow or a bull. If nothing hangs, you have two further options; it is either a ‘heifer’, being a young female who has yet to develop an udder; or a ‘steer’ or ‘bullock’ being a male who has had his appendage removed. Don’t assume that all males have rings in their noses either. They don’t, and such an assumption can lead to unnecessary exercise if you venture into their enclosure.

Thus, we’ve sorted out colour and sex but there’s another definition to consider – dairy or beef? Dairy animals – or at least the cows as opposed to the bulls – tend to be bony and angular and their udders can be highly developed. They are kept to be milked to supply your local chiller counters with milk and yoghurt and cream and cheese and everything else ‘dairy’. In toto, we eat an awful lot of dairy products although vegans don’t touch them. The other type – ‘beef’ – are, well, beefier. Thick in body and a bit more ponderous, (but please don’t count on my description when calculating if you can get across to the far side of a field of cows or not), they are the specialist breeds used to provide the meat counter with all those steaks and roasting joints and packs of mince and burgers etc.

All cattle breeds, until the Victorian era, had to fulfil both jobs and maybe even traction too since before horses and steam engines and tractors, bullocks, mainly, would be the animals that did the ploughing and the carting around the farm but got superceded by the speedier horses. Interestingly, oxen, as working cattle used to be known, (another definition to learn instead of just ‘cows’), were still used on the Cirencester Park estate until the middle of the 20th century – not exclusively but as a means of keeping a tradition going.

But farmers in the 20th century soon learnt that it was better to specialise and get your milk from a
dairy breed such as a Holstein or Jersey and beef from your specialist beef breed such as Hereford or Charolais, (a French interloper).
There you are then – your five-minute guide to bovine animals of all sorts employed upon the land. You could instead go the library and check out a 400-page book on the same subject but that will just give you lots more unnecessary peripheral stuff that will not help you either driving around or running across fields.

0 comments on “Country Matters March 19: Your Guide to Cow Breeds”